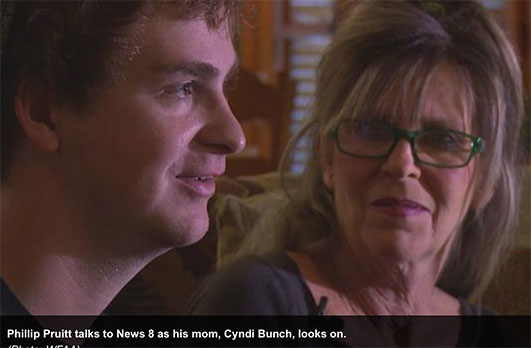 Their story first started more than a decade ago, when Phillip Pruitt was eight years old.

His mom, Cyndi Bunch, had to explain an adult problem to a curious young boy.

“It was the hardest question I had to answer in my life,” she told us.

Today, mother and son are both thriving, 12 years after their husband and father, Phillip Sr., left the family’s home during a schizophrenic breakdown to live on the streets.

“I didn’t really know what was going on at the time, because my mom was hiding a lot of it,” Phillip Pruitt said.

“They suffer along with the person they love,” his mother added.

At the time, young Phillip just wanted to make sure his Dad was warm on the streets of North Texas. The then-eight-year-old imagined giving blankets to all homeless people in the area.

A charity was born, and Phillip’s Wish has been a part of their lives ever since.

A family’s tragedy has inspired a charity, and now, a movie. News 8’s Philip Townsend has more.

“I still feel the same way as I did ten years ago with the project,” Phillip said.

But their story doesn’t end in front of our cameras. Cyndi and Phillip’s journey has caught the eyes of producers in Hollywood.
“Is this real?” Cyndi said. “Is this really happening?”

The movie based on their true story is called “5,000 Blankets.” It’s already in pre-production.

We asked Phillip if he was ready to see his dad portrayed in a movie.

“I think it will be tough for people who are going through that, because they really need that help,” he told us.

Cyndi believes pain sometimes presents itself so you can find a purpose.

While Phillip Sr. is still in and out of institutions, he has inspired his family to find theirs.